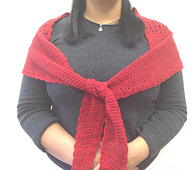 Sometimes you just need a bit of warmth around your shoulders. This is particularly true in office buildings where no matter where you sit, the A/C or fan seems to settle in around your shoulders and nip at the back of your neck. This is especially true in my office -- sometimes the temperature will drop 20 degrees over the afternoon hours, leaving me shivering and chilled to the core.

I crafted this shawlette to sit naturally at the shoulders and out of the way of your arms. It can hang untied down your arms, or draped with a gentle knot at your chest. 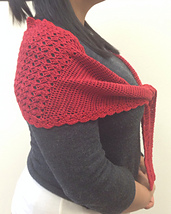 It is constructed sideways, starting with a 4-stitch SC row and expanding every other row to a width of 45 stitches that is worked in a sideways shell for 30 rows before reducing back down to 4 SC stitches. This produces a shawl with a straight edge and a lower edge that looks like a flat-bottomed wedge. The border consists of (2) a row of sc stitches, (2) a row of sideways shells (sc, ch2, 2dc, all in the same stitch, sk 2, repeat), and (3) a partial row of sideways shells worked on the lower edge from end to end. 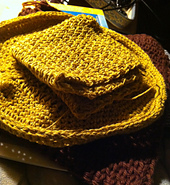 It seems as if I spent most of last year in pain.  No, not the pain of a watching a steadily deteriorating 2012 presidential election campaign, nor the pain of living in a swing state, although by the time November 6 had rolled around, I was ready to unplug myself from all modern -- and not so modern -- communication mechanisms.  And, no, not the pain of a slow recovery from two back-to-back minor car accidents that had me in weekly physical therapy for 6 months.

Rather, I'm talking about the pain of tendonitis.  For much of last year, I suffered from recurring tendonitis in my right wrist.  Tendonitis is a bitch, particularly when the inflammation holds hostage the very muscles one uses for a favorite activity.  At several points in the year, I would pick up my hook, make a hat or two, only to have to immobilize my wrist when the pain came flaring back.  Even a steroid shot didn't provide long-term help.

Happily, I can report that the inflammation is virtually gone.   As I struggled to figure out why the pain kept returning, I discovered that how I cradled my wrist when I crocheted further inflamed an already inflamed tendon.

I even managed to get over my dislike of the front post stitch.   Executed only on the front side of the fabric, in alternating rows, the fpdc created a beautifully textured designs, such as these two squares.

﻿
I made 12 washcloths last year.  I also ended the year with a wealth of knowledge about how to reduce the chance for injury, as well as gained a greater appreciation for the craft of crochet.
﻿﻿﻿﻿﻿﻿However, I still hate the back post stitch.

More Off the Hook 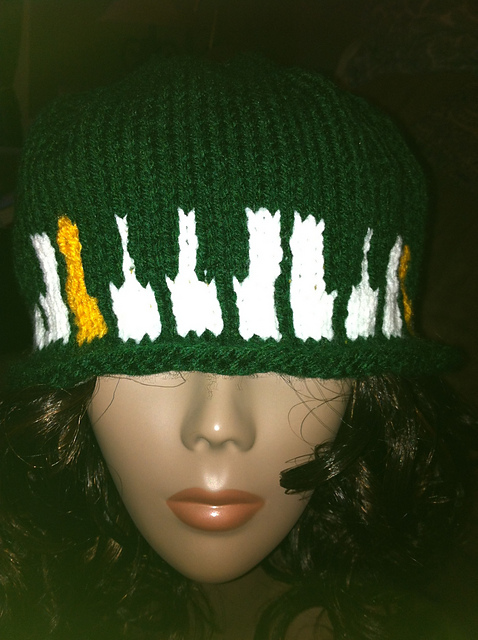 During February and March, I managed to crochet more than 2200 yards.  No, my wrist still hurts but not as much since I'm started wearing a splint to immobilize my wrist and thumb at night.
FEBRUARY Projects 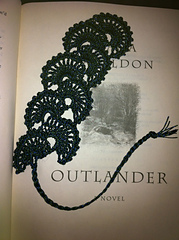 First out of the gate was the MacKenzie Tartan Bookmark, made from some vintage thread purchased at an estate sale several years ago. The Fan Bookmark pattern was designed by Crochetroo.  Named in honor of the the primary color in the MacKenzie Tartan, this will be a gift to someone in a Ravelry swap I'm in.  Made from Collingbourne's Luxura, Size 20 crochet thread,  (marketed as artificial silk thread), this actual spool was manufactured sometime between the mid-1920s to as late as 1943.  After a slow start, this bookmark worked up fast.  I will definitely make a few more.  Yardage = 25 yards
During February I took a stab at knitting. I even went so far as to attempt stranded color knitting.  I made two different versions of Lindsay Koehler's Piano Hat.  The first hat was completely knitted (with crocheted ear flaps added as an afterthought), while the other was crocheted with the keyboard knitted added before the crocheted ear flaps.  These ear flap hats were crafted for DN #1 and her buddy, both cheerleaders at their local junior college.  They wanted hats in their school colors (green, white, and gold) to wear while cheering during outdoor games. DN#2 calls these "Henry Hats."  Long story.  Total yardage = 415 yards 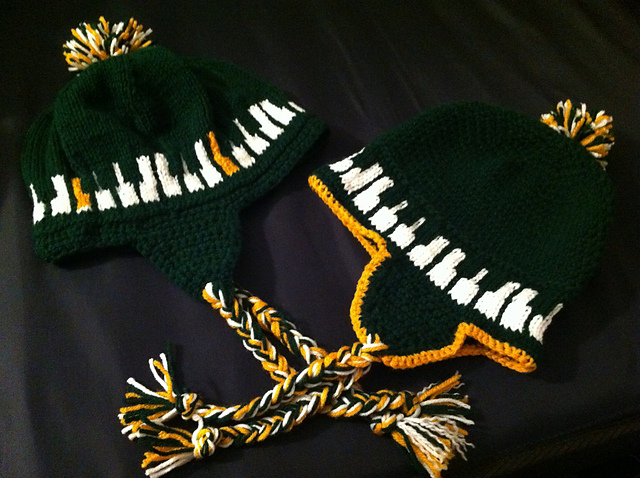 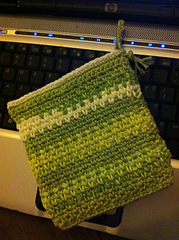 I started the month off with Mondo's Scrappy Key Lime Dish Cloth.  Having been tasked to craft something out of scrap yarn, I took inspiration watching Project Runway when Mondo Guerra pulled together and won! with this little dress made of different fabrics. I alternated two different balls of cotton yarn -- one was solid green and one transitioned from white to various shades of green.  The texture is created using the SC-Ch stitch combination.
I was then tasked to find inspiration from a Gustav Klimt painting.  I love images of trees, so naturally when I saw this picture, I had to craft something!  And would you know it, I had three skeins of Lion Brand Homespun in the exact same colors!  Thank goodness for bulky yarn because my Birch Forest Homespun Shawl went from start to finish in less than 10 hours.  I used the Half Granny Square Shawl pattern by Anastacia Zittel.  Despite a wingspan of more than 70 inches, the shawl weighs just over a pound.  A perfect shawl for the office.  Total yardage = 555 yards 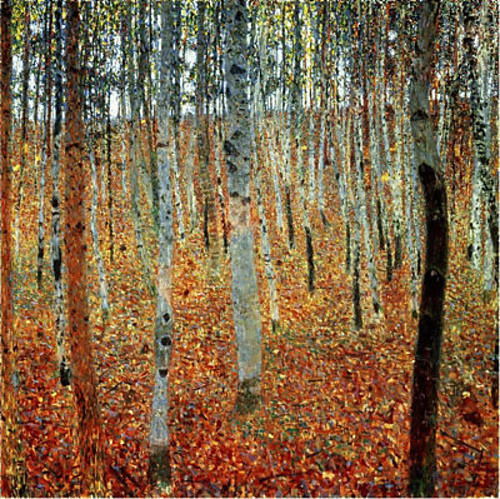 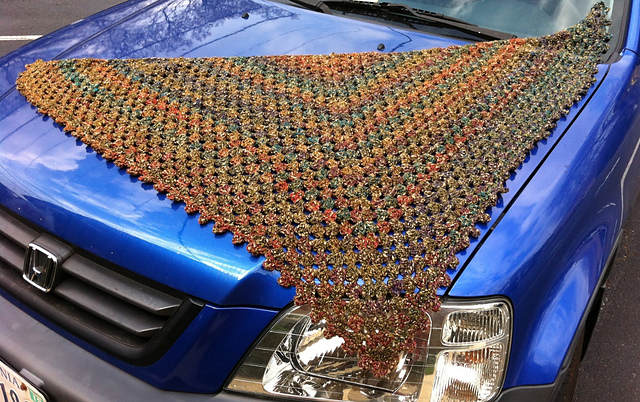 Next up was a felted tote that started out as a wool watch cap for my father.  My sister Constance has always said that my father has a big head so I made it a bit large.  Knowing that it was going to be felted, I made it a bit bigger. However, when I finished crocheting the brim, I realized that it was waaaaay too bit, even for my "big-headed" father.  So, I turned it upside down, added on the straps and button, and felted the hell out of the new tote. This will make someone a great project bag.  Yarn used was Patons Classic Wool and Lion Brand/s Wool Solids.  Yardage = 762 yards 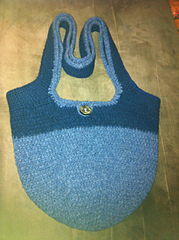 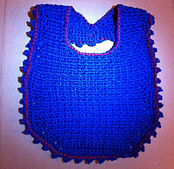 This little baby bib was a simple project to craft, using almost a skein of Ornaghi Filati Gong, a plush mercerized DK cotton yarn.  Its trimmed in a single ply of red cotton pulled from a scrap of 4 ply TLC Cotton Plus. Yardage = 121 yards

I made this Massage Ball Sack to use as part of my physical therapy. This sack is designed to hold two tennis balls next to one another to aid in trigger-point therapy, an alternative type of massage used by physical therapists to break up the trigger points or muscle knots that are the source of pain throughout various parts of the body. The balls effectively reach either side of the spine, upper back, and other targeted areas of the upper and lower-body, as well as thigh and calf muscles.  I used Lion Brand Sock-Ease in Grape Soda.  Yardage = 219.
No comments:

Anatomy of a Stitch: The Single Crochet

Okay, time for a bit of honesty.  The single crochet stitch, when used by itself, lacks . . . lacks . . . lacks beauty and style.  It is a very ugly stitch when worked flat and, occasionally, in the round.  The fabric it creates when worked in a straight row as shown in the border of the washcloth below, showcases each row, each stitch hole, in painful detail.  One can easily see the "knots" that make crochet fabric so thick and unwielding, and so unattractive that it dissuades many from picking up a hook.  The resulting fabric is just plain fugly; it does not drape well, not even when worked with an overlarge hook.  Can you tell that I am just not a fan of this stitch?

Several years ago, I made my first lace shawl.  Its recipient remarked that she did not know that crochet could be so beautiful. Praise and damnation.  Unfortunately, the only crochet she had seen were "old-fashioned" granny squares, and single crochet washcloths and hats.  She had not been exposed to the beauty of crochet, which lies in the variety of textures and patterns that can be produced when basic stitches are used in combination with other stitches.  You'll find that this is particularly true for the lowly single crochet stitch that seems to blossom when used in combination with other stitches (i.e., chain, half-double crochet, double crochet, etc.). Take another look at the washcloth below.  The rigid bands of single crochet surround shells created by placing 3 sc stitches into one stitch.  A totally different fabric that looks less like a bunch of neat knots in a row and more like textured fabric.  Worked in the proper sized hook, the resulting fabric is full of drape. 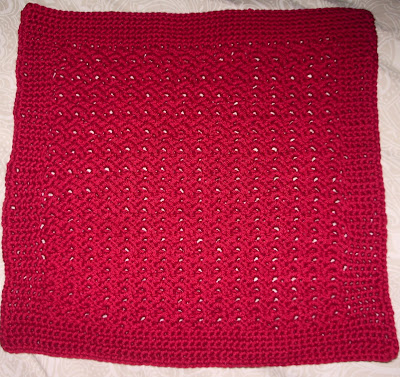 Single Crochet-Chain combination:
In recent years, I have avoided the single crochet, opting instead for the half double crochet when making hats in the round, 5- and 7-double crochet stitch shell patterns for afghans, and double crochet-chain combinations for lace shawls.  Anything but straight sc.  But I''ve found some neat patterns calling for single crochet in straight rows.  Hunting around for alternatives, I found instances where some crocheters  substituted a sc-ch combination where you sc into the chain in the previous row and ch one, skipping the sc in the previous row.  This creates a relatively solid frabric with a semi-criss cross texture (see below) that lays flat, is stretchy when pulled from the top and bottom, but stable when pulled from side to side.  The stitch combination works in the round as well.  Two examples -- a washcloth worked flat and a heating pad worked in the round. 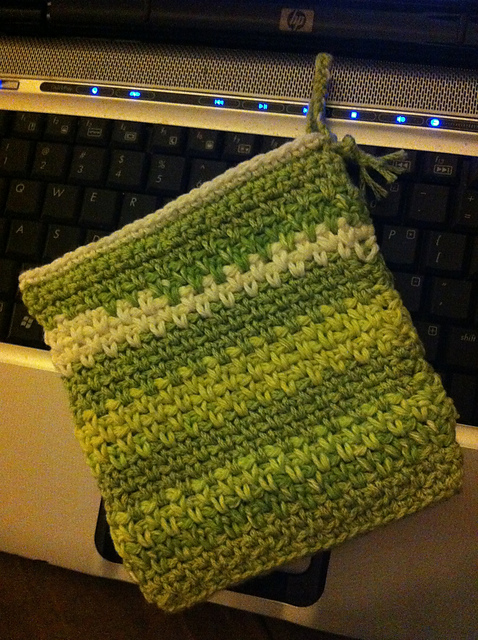 Split Single Crochet:
This is more about hook placement rather than stitch combination.   Instead of working into the top loops of the stitch in the row below, you insert your hook between the 2 vertical legs of the single crochet stitch in the previous row,  See my previous post for more information about how this works when working flat versus working in the round. 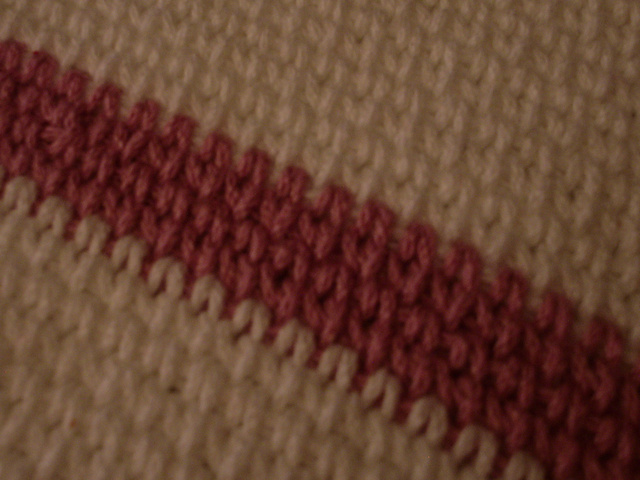 Here, a series of split-sc stitches alternates with a series of chain to produce what could pass for sloppy garter/stockinette.  When blocked, this fabric stretches easily from side to side but less so when pulled top to bottom. 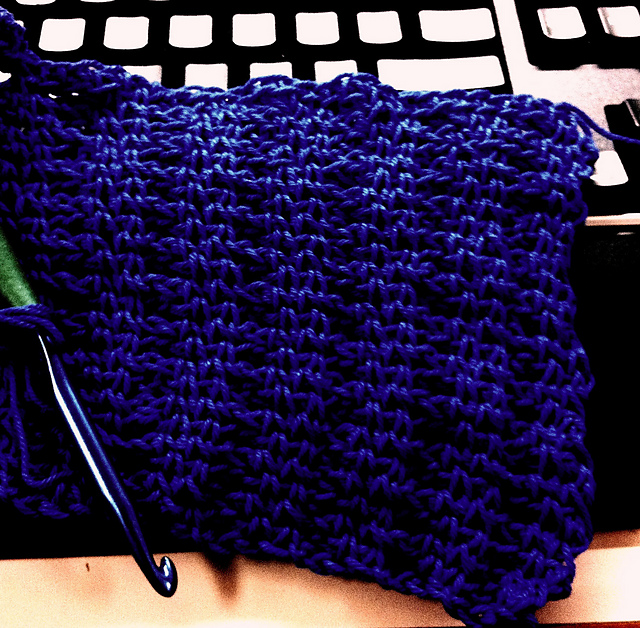 There are infinite possible ways to use the single crochet stitch.  Obviously, you can work it in straight rows.  More importantly, you can also use it as a building block for creating more complicated stitches when used in combination with itself and other stitches.
No comments:

Then there is Bella.  To paraphrase Forrest Gump's mother, "Stupid is as Bella does!"

Bottom line: why I have not read beyond the first half of Twilight, nor will I see any of the movies. 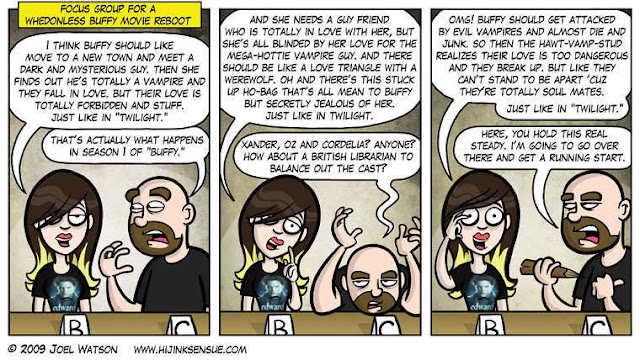 Josh Whedon, my condolences.
No comments:

Vic-Jo-Rob
Victoria has been an active genealogist for more than 35 years, although she has been building her family tree for nearly 45 years. She also works to help others discover their roots. For more than 26 years, she has worked as a senior librarian at the Annandale [VA] Family History Center, where she teaches patrons and staff about genealogy research, with a special emphasis on African American and DNA research.

What is Past is Prologue